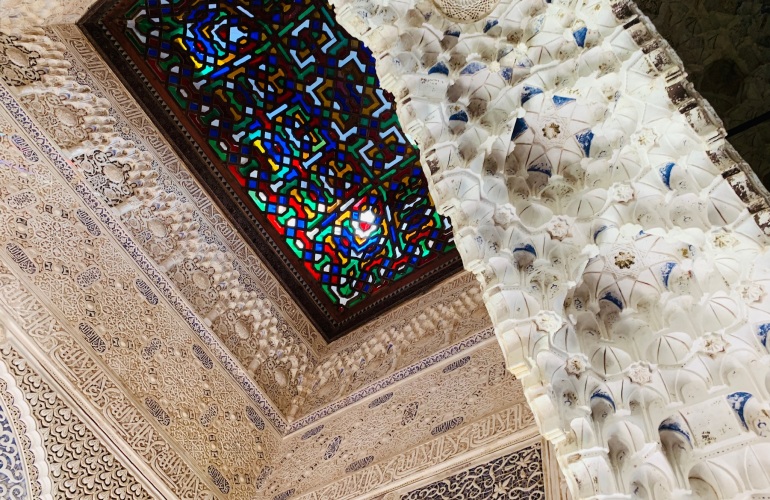 Granada, my favorite city! Oops . . well, I guess it’s true! Every city we visited in Spain was unique and memorable in its own way, but Granada was my personal favorite. This city is known for its romantic atmosphere, as any proud local will tell you, and it’s the location of the most-visited tourist attraction in all of Spain, La Alhambra!

How to Spend 2 Days in Granada, Spain

You can’t find a more breathtaking or impressive remnant of Moorish architecture than La Alhambra. We spent three and half hours walking its grounds and taking in every piece of historical significance our tour guide pointed out to us, and if it hadn’t been for our grumbling stomachs, we could have spent the rest of the day exploring this impressive fortress!

Know Before You Go: The Alhambra Granada, Spain is the must-see attraction in all of Spain so tickets sell out quickly. It’s best to buy Alhambra Granada tickets at least 2-3 months in advance to secure your spot. However, to truly enjoy this historical treasure, I highly recommend booking a guided tour. A good tour guide will make your visit to the Alhambra an incredibly memorable experience. They can explain all the subtleties of the Moorish architecture that are easy to miss and help you avoid getting lost in the Alhambra’s maze-like structure (which is especially helpful since there are specific time slots for all tickets). Here are some of the most impressive things we observed on our tour through the Alhambra:

The ornate decorations, carvings, and tile mosaics covering every inch of the interior walls of the sultan’s palace often caused optical illusions and were a source of stimulation in a technology-free time.

The Arabic inscriptions printed all over the interior walls are written in modern Arabic and an antiquated version of the language that is no longer in use. The inscription “Only Allah is victorious” is written about 100,000 times throughout the Alhambra. Decorative inscriptions of verses from the Koran aided in meditation and contemplation.

The Moors believed that any plants or flowers they grew throughout the Generalife (the summer palace) and the rest of the Alhambra had to be beautiful AND useful.

The eight-pointed star I saw in several Moorish sites throughout Spain, and especially in the Alhambra, is believed to represent the seven levels of heaven and final paradise in the Islamic religion.

Like most Moorish remnants, the Alhambra showcases a mix of Catholic and Islamic symbolism. The Moors adopted a coat of arms like the Catholics used, and they painted people’s faces in a mural on one of the ceilings of the palace, again influenced by the Catholics since Islamic holy places never contain any depictions of people’s faces.

I could go on and probably fill a whole chapter book with all the things we learned and saw on our tour of the Alhambra, but I’ll stop here because I have a few more fun ideas of what to see in Granada, Spain (and what to do)!

Remember the unforgettable hot baths we visited in Madrid? Well, we loved them so much we booked another visit to the hot baths in Granada! And it was just as wonderful. These are truly one of the best Granada, Spain points of interest. Soaking in the hot baths, along with a thirty-minute massage, was hands down the most relaxing experience of my life. These authentic baths are covered in the same geometrical mosaics and wood carvings that decorate the famous Alhambra. The atmosphere is truly one of a kind with the warm clouds of steam, candlelit passageways, and serene melodies welcoming you to breathe and relax. I wish they had these in Miami!

This lookout was recommended to us by our Alhambra tour guide and was the picture perfect spot to watch the sun set over the ancient castle. At this time of day, the red coloring of the Alhambra is intensified, and the whole palace appears to be glowing. Unfortunately, the amazing view you get from this spot is no secret so it’s best to arrive early and secure yourself a front row seat.

If you’re looking for two days in Granada that are nothing alike, then this itinerary will satisfy your need for variety! Like these Day 2 destinations will show you, places to see in Granada don’t end with the Alhambra. There’s plenty of out-of-the-box places to explore both in and outside the city, including adventurous day trips from Granada.

Someone online called this a beginner, “family-friendly” trail … I would politely disagree. While the trail was doable it was also 1) tricky to find so we accidentally parked about a half mile from the start, 2) overgrown in places, making it difficult to see the trail ahead, and 3) lacking the abundance of hand rails that would have made my height-fearing mom more comfortable. What was great about the trail was 1) the up-close views of the surrounding mountains and hidden waterfalls and 2) the famous suspension bridges (as rickety as they appeared, they added a sense of fun and adventure to a somewhat exhausting hike). Overall, it was more outdoorsy and rough than we expected. Some of us enjoyed it even more for that and some of us were on the verge of a panic attack by the end. Even with the stress, I like to remember it as an adventurous afternoon getting lost in nature 😉 .

Know Before You Go: Situated a short 20-30 minute car ride outside of Granada, this hiking trail is like a mini day trip. Be prepared with plenty of water and proper active wear. Also, make sure you give yourself plenty of daylight time to complete the trail and get back to your vehicle. Although we didn’t encounter any, we were told the area is home to different wildlife.

We stumbled upon this little plaza on our walk to the Hammam, and it was so endearing we had to come back. I’m glad we did because we discovered that the Churreria Torres Bermejas here has some of the most delicious churros we’ve ever tried. These puffy and light churros are paired perfectly with creamy hot chocolate for dunking. That moment of eating my churros, sitting amidst the quaint, old buildings that bordered the plaza was pure bliss!

Our airbnb host recommended Calle Calderería Nueva to us and it turned out to be just a few blocks over from our churro place! This side street is lined with Moroccan-inspired souvenir shops overflowing with handmade clothing, journals, and mesmerizing glass mosaics. Calle Gran Vía de Colón is a larger main street housing more upscale shops and eateries, but the the thing I loved most about it is walking down this street at night under the glow of its LED light banners.

Where to Stay in Granada, Spain

Of all the airbnbs we stayed at in Spain, I was mosted excited for our stay at this Granada airbnb, and thankfully, it did not disappoint! I loved the attention to detail the owners put into this apartment. Small touches like the modern, but cozy decor and the fun guest book are the things that made me feel most at home.

Other amenities included: 1 full bed, 2 single beds, 1 sofa bed, a full kitchen, WiFi, a workspace, a modern bathroom, and an elevator within the building. The location of this airbnb was awesome, as well. We were walking distance from everything on our itinerary (except Los Cahorros Hiking Trail), and the nieghborhood seemed pretty safe.

Getting There: We drove to this airbnb, and like we experienced in other Spanish cities, the old streets can be very winding and narrow at points. Thankfully, we didn’t experience the same nightmare as in Toledo, but it’s important to stay vigilant and not blindly follow Google Maps. We found a parking lot about a block or so from this airbnb that worked well. Initially the attendant told us we couldn’t park overnight, but eventually he reconsidered, and our van was perfectly safe our whole stay in Granada.

Granada was one stop on a 14-day, 6-city trip through Spain. We drove the short 2 hours and 15 minutes from Córdoba to Granada, but the trip can easily be done in reverse as well, traveling from Granada to Córdoba. Either way I highly recommend both cities for your itinerary, and if you need some inspiration for things to do in Córdoba, check out my post 1 Day in Córdoba, Spain.

Granada, you were wonderful! I hope to be back in your cobble-stoned streets some day soon. And because you can never see too much of the Alhambra, here are few more stunning shots of the fortress:

View all posts by Alissa Teijeiro